The Steward, By Carol Lynn Pearson 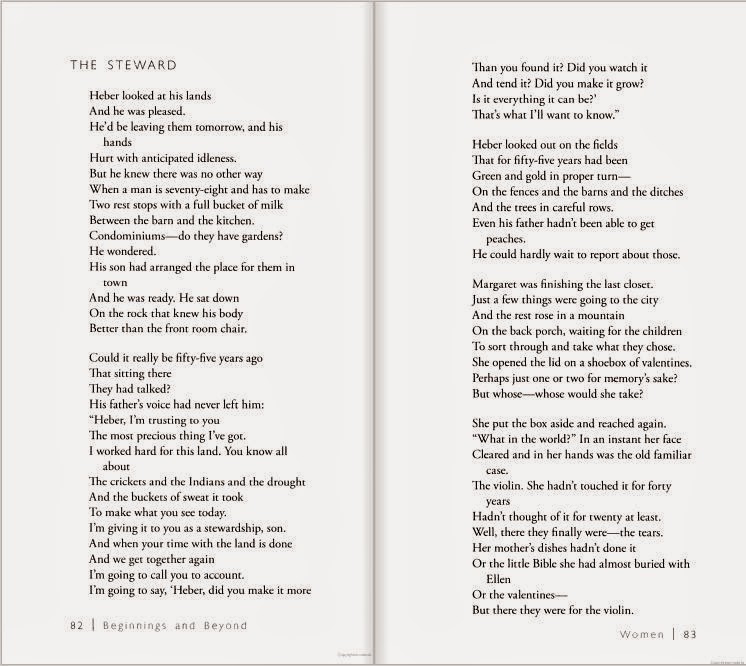 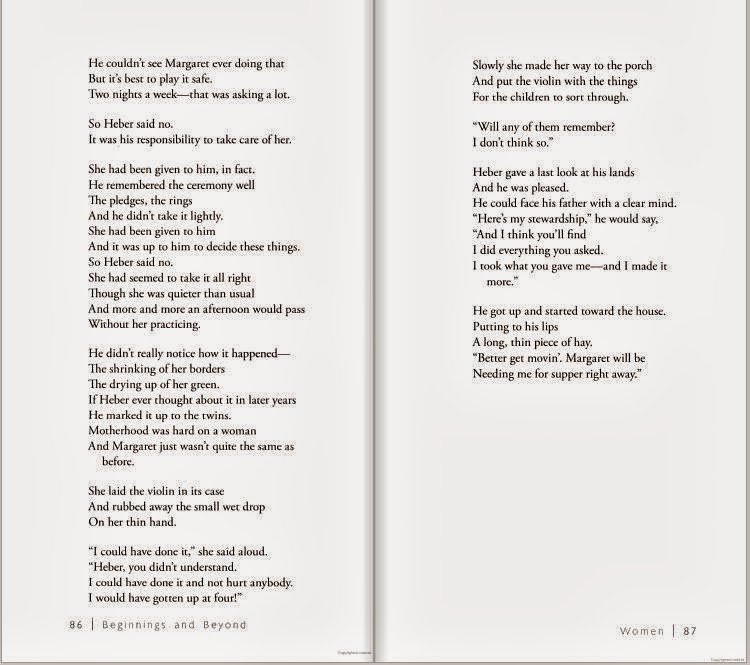 
The Steward
~ a poem by Carol Lynn Pearson, from her book, Beginnings and Beyond

Heber looked at his lands
And he was pleased.
He’d be leaving them, tomorrow, and his hands
Hurt with anticipated idleness.
But he knew there was no other way
When a man is seventy-eight and has to make
Two rest stops with a full bucket of milk
Between the barn and the kitchen.
Condominiums-do they have gardens?
He wondered.
His son had arranged the place for them in town
And he was ready. He sat down
On the rock that knew his body
Better than the front room chair.

Could it really be fifty-five years ago
That sitting right there
They had talked?
His father’s voice had never left him:
“Heber, I’m trusting to you
The most precious thing I’ve got.
I worked hard for this land. You know all about
The crickets and the Indians and the drought,
And the buckets of sweat it took
To make what you see today.
I’m giving it to you as a stewardship, son.
And when your time with the land is done
And we get together again
I’m going to call you to account.
I’m going to say, ‘Heber, did you make it more
Than you found it? Did you watch it
And tend it? Did you make it grow?
Is it everything it can be?’
That’s what I’ll want to know.”

Heber looked out on the fields
That for fifty-five years had been
Green and gold in proper turn-
On the fences and the barns and the ditches
And the trees in careful rows.
Even his father hadn’t been able to get peaches.
He could hardly wait to report about those.

Margaret was finishing the last closet.
Just a few things were going to the city
And the rest rose in a mountain
On the back porch, waiting for the children
To sort through and take what they chose.
She opened the lid on a shoebox of valentines.
Perhaps just one or two for memory’s sake?
But whose-whose would she take?

She put the box aside and reached again.
“What in the world?” In an instant her face
Cleared and in her hands was the old familiar case.
The violin. She hadn’t touched it for forty years,
Hadn’t thought of it for twenty at least.
Well, there they finally were-the tears.
Her mother’s dishes hadn’t done it,
Or the little Bible she had buried with Ellen,
Or the valentines –
But there they were for the violin.
She picked up the bow.
Had it always been so thin?
Perhaps her hand had grown so used to big things,
To kettles that weighed ten pounds empty,
And to milk cans and buckets of coal.

The wood felt smooth against her chin
As she put the bow to a string.
A slow, startled sound wavered, then fell.
How did she used to tune it? Ah, well.
No sense wasting time on moving day.
If Heber should come in, he would say,
“Well, there’s Margaret – fiddlin’ around
With her fiddle again.”
He’s always said it with a smile, though.

He hadn’t minded that she’d practiced two hours
Every afternoon – after all, she got up at five
and nobody in the world could criticize
The way she kept the house
Or the care she gave to the children.
And he was proud that she was asked
To play twice a year at the church.
And music made her so happy.
If she missed a day things were not quite
So bright around the house.
Even Heber noticed that.

And then she was invited to join the symphony in town.
Oh, to play with a real orchestra again!
In a hall with a real audience again!
“But, Margaret, isn’t that too much to ask
Of a woman with children and a farm to tend?”

“But I couldn’t drive you in,
Not two nights a week all year round,
And more when they’re performing.”

“I can drive, Heber. It’s only twenty miles.
I’d be fine. You would have to be
With the children, though, until Ellen
Is a little older.”

“But I couldn’t guarantee two night a week –
Not with my responsibilities to the farm,
And to the Church.”

“Heber, there’s no way to tell you
How important this is to me. Please, Heber.
I’ll get up at four if I have to.”

But Heber said no.
What if something happened to the car?
And then it just wouldn’t look right
For a man’s wife to be out chasing
Around like that. What would it lead to next?
Once in a while he read of some woman
Who went so far with her fancy notions
That she up and left her family, children and all.
He couldn’t see Margaret ever doing that,
But it’s best to play it safe.
Two nights a week – that was asking a lot.
So Heber said no.
It was his responsibility to take care of her.

She had been given to him, in fact.
He remembered the ceremony well,
The pledges, the rings,
And he didn’t take it lightly.
She had been given to him,
And it was up to him to decide these things.
So Heber said no.
She had seemed to take it all right,
Though she was quieter than usual
And more and more an afternoon would pass
Without her practicing.

He didn’t really notice how it happened –
The shrinking of her borders,
The drying up of her green.
If Heber ever thought about it in later years
He marked it up to the twins.
Motherhood was hard on a woman,
And Margaret just wasn’t quite the same as before.

She laid the violin in its case
And rubbed away the small wet drop
On her thin hand.

Slowly she made her way to the porch
And put the violin with the things
For the children to sort through.
“Will any of them remember?
I don’t think so.”

Heber gave a last look at his lands
And he was pleased.
He could face his father with a clear mind.
“Here’s my stewardship,” he would say,
“And I think you’ll find
I did everything you asked.
I took what you gave me – and I made it more.”

He got up and started toward the house,
Putting to his lips
A long, thin piece of hay.
“Better get movin’. Margaret will be
Needing me for supper right away.”