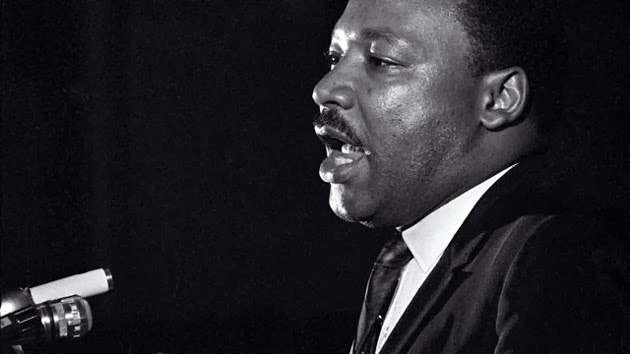 In Memphis to support sanitation workers, Martin Luther King, Jr. was assassinated April 4, 1968. The previous night he spoke at the Church of God in Christ Headquarters there in Memphis where he delivered another (and final) of his famous speeches. This “I’ve been to the mountaintop” speech poignantly ends with the following words:

“And then I got into Memphis. And some began to say the threats, or talk about the threats that were out. What would happen to me from some of our sick white brothers? Well, I don't know what will happen now. We've got some difficult days ahead. But it really doesn't matter with me now, because I've been to the mountaintop. And I don't mind. Like anybody, I would like to live a long life. Longevity has its place. But I'm not concerned about that now. I just want to do God's will. And He's allowed me to go up to the mountain. And I've looked over. And I've seen the Promised Land. I may not get there with you. But I want you to know tonight, that we, as a people, will get to the promised land! And so I'm happy, tonight. I'm not worried about anything. I'm not fearing any man! ‘Mine eyes have seen the glory of the coming of the Lord!’”

Earlier in the speech Dr. King discussed the meaning of the Parable of the Good Samaritan, then challenged us to “make America what it ought to be.”

“Let us develop a kind of dangerous unselfishness. One day a man came to Jesus, and he wanted to raise some questions about some vital matters of life. At points he wanted to trick Jesus, and show him that he knew a little more than Jesus knew and throw him off base....

“Now that question could have easily ended up in a philosophical and theological debate. But Jesus immediately pulled that question from mid-air, and placed it on a dangerous curve between Jerusalem and Jericho. And he talked about a certain man, who fell among thieves. You remember that a Levite and a priest passed by on the other side. They didn't stop to help him. And finally a man of another race came by. He got down from his beast, decided not to be compassionate by proxy. But he got down with him, administered first aid, and helped the man in need. Jesus ended up saying, this was the good man, this was the great man, because he had the capacity to project the ‘I’ into the ‘thou,’ and to be concerned about his brother.

“Now you know, we use our imagination a great deal to try to determine why the priest and the Levite didn't stop. At times we say they were busy going to a church meeting, an ecclesiastical gathering, and they had to get on down to Jerusalem so they wouldn't be late for their meeting. At other times we would speculate that there was a religious law that ‘One who was engaged in religious ceremonials was not to touch a human body twenty-four hours before the ceremony.’ And every now and then we begin to wonder whether maybe they were not going down to Jerusalem -- or down to Jericho, rather to organize a ‘Jericho Road Improvement Association.’ That's a possibility. Maybe they felt that it was better to deal with the problem from the causal root, rather than to get bogged down with an individual effect.

“But I'm going to tell you what my imagination tells me. It's possible that those men were afraid. You see, the Jericho road is a dangerous road. I remember when Mrs. King and I were first in Jerusalem. We rented a car and drove from Jerusalem down to Jericho. And as soon as we got on that road, I said to my wife, ‘I can see why Jesus used this as the setting for his parable.’ It's a winding, meandering road. It's really conducive for ambushing. You start out in Jerusalem, which is about 1200 miles -- or rather 1200 feet above sea level. And by the time you get down to Jericho, fifteen or twenty minutes later, you're about 2200 feet below sea level. That's a dangerous road. In the days of Jesus it came to be known as the ‘Bloody Pass.’ And you know, it's possible that the priest and the Levite looked over that man on the ground and wondered if the robbers were still around. Or it's possible that they felt that the man on the ground was merely faking. And he was acting like he had been robbed and hurt, in order to seize them over there, lure them there for quick and easy seizure. And so the first question that the priest asked -- the first question that the Levite asked was, 'If I stop to help this man, what will happen to me?' But then the Good Samaritan came by. And he reversed the question: ‘If I do not stop to help this man, what will happen to him?’

Listen to the, "I've been to the Mountaintop" speech here:
http://www.americanrhetoric.com/speeches/mlkivebeentothemountaintop.htm

Listen to the, "I Have a Dream" speech here:
http://www.americanrhetoric.com/speeches/mlkihaveadream.htm

Email ThisBlogThis!Share to TwitterShare to FacebookShare to Pinterest
Labels: i have a dream, i've been to the mountaintop, Martin Luther King Junior, memphis
Newer Posts Older Posts Home
Subscribe to: Posts (Atom)